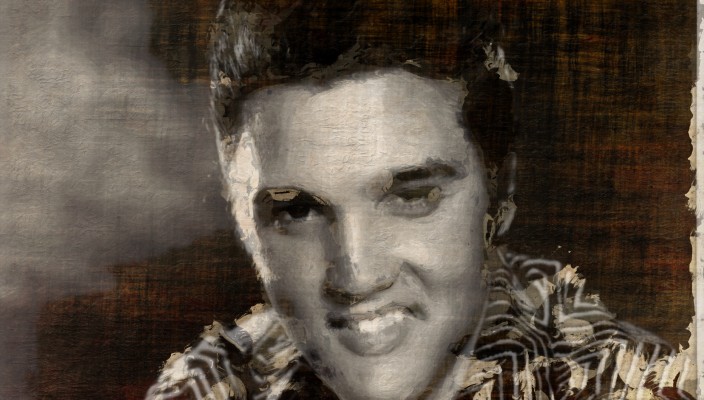 I first met Elvis Presley in a dive bar in Fuertaventura. I didn’t know he was Elvis at first. We were just shooting the breeze at the bar, chatting about tourists and the musical fashions of 1999 or whatever it was.

Now by this point I’d given up on the old rocker. The fact that he’d supposedly died back in the seventies didn’t fool me. I’d seen him around, heard him singing on street corners and running in marathons.

But this guy in the bar was leather clad slim-jim cool. I didn’t know why I hadn’t recognised him right away. After he’d slipped out of sight for ten minutes before emerging as Elvis Comeback ’68 and tearing the place apart no one was in any doubt. The king lived.

OK, it was a karaoke show, but that’s Elvis’s territory these days. You don’t hear Elvis covers or tributes anywhere. He’s not even made it to Halloween costume status.

At one point he was the King of Rock and Roll – a performing chimp for one of the music business’s more successful conmen, or one of the world’s most compelling live performers depending on your point of view. Certainly judging by his hip-swaying leather-clad barnstorming show in the Fuerta bar he’s still got it.

His version of ‘A Little Less Conversation’ was the proper Comeback 68 version, not the “Live a little, Love a little” version from that cheesiest of movies. The same one that some dutch feller with the improbable moniker ‘Junkie XL’ gave some club juice after its use in the George Clooney / Brat Pitt movie Ocean’s Eleven.

My real favorite Elvis appeared in the movie King Creole, a film directed by Michael (Casablanca) Curtiz and based on a novel by Harold Robbins. Elvis as a surly youth in this one, and few of the Hollywood a-list punks could have pulled it off as effectively as the king did.

But lets curtail the chat. Cut the crap. A little less conversation, please.