Andy Royston is an award-winning artist, photographer and designer from Yorkshire, England, living it large down in South Florida.

Andy’s adventures in music comes interwoven with a celebrated design career. It all began with a teenage love of DIY indie and atonal noise. You know that unlistenable “Metal Machine Music” by Lou Reed? You ever wondered who would actually listen to it? 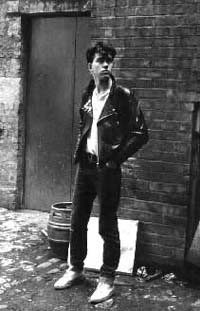 By the time he’d arrived in Manchester he’d already amassed a vast collection of one-off and self-released 45 vinyl from the likes of Scritti Politti, The Fall, Cabaret Voltaire and Throbbing Gristle as well as cutting-edge American avant grade acts such as The Residents, Pere Ubu and The Cramps.

In Manchester he was one of those annoying post-punks blagging their way into the Russel Club, Rafters and The Beach Club and never ever going home. Early claims to fame include witnessing U2 playing to eight people, getting thumped at a Theatre of Hate show, promoting the biggest poets-only gig in England (John Cooper Clarke, Linton Kwesi Johnson headlined the mecca of the modern dance, the Ritz) before winding up as founding designer of City Life magazine. He was soon busy creating poster designs for visiting bands – amassing a collection that took in everyone from John Marytn and Bill Nelson to Southern Death Cult and Culture Club. The story of him leaning on the stage at a Generation X gig reading the Financial Times is only partly true…

From promoting student union rock gigs to writing reviews for London music rags under assumed names – including parodies of other Manchester rock writers (some of which were published under their name, much to their chagrin) – he wasn’t about to take anything seriously any time soon. It as a miracle that he completed his degree in advertising and graphic design.

In London – inevitably – he soon found himself working on layouts for übercool listings magazines Time Out and the newly Neville Brody designed City Limits – where he also wrote reviews, shorts and editorial pieces. He moved on into designing record sleeves during the golden age of British new wave – bands like Def Leppard, Eurythmics and Simply Red were all daft enough to give him an extended crack. Hucknall and Royston had both been occasional DJs back at MPSU and the band got him through the doors at Elektra Records. He also thinks he did a Nick Cave album ad campaign, but then again he thought he could play bass guitar…
He was also darkening the doors of Rough Trade, Creation, Ace and Mute/ Rhythm King, widening his design repertoire to take in reggae and hip-hop acts, and attending around a million obscure gigs in every corner of the capital and STILL not going home. Sleevewise Pink Records and September were particular favorites, and he pretty much put them out of business with reverse-board print techniques, designs built from distorted photocopies and old Futurist paintings. McCarthy and Wolfhounds took great pride in their Royston sleeves.

After a brief (and ear-splitting) time working with Kevin Sheilds and My Bloody Valentine he finally left the music industry in a cloud of guitar feedback –  disappearing into BBC Television Center for a decade to dress up the national news shows. Fun (and International Awards tomfoolery) followed.

Eventually he scarpered from Blighty altogether when one of South Florida’s top design companies made him an offer he couldn’t refuse. Creative Director and a tropical swimming pool? Oh yes…

Today, in 2014, he is busy working on the launch of Broward County’s forthcoming centennial celebration ‘Broward 100’ and is entering his tenth year looking after the online affairs of Indycar hot shot Marco Andretti. He continues to evolve stylistically and the music still plays constantly.

Finally, if that’s not enough, there’s his fine art, which has developed in the city he calls home, Fort Lauderdale. His photo art is entirely created on cellphone, a medium that Andy believes will drive creativity of the next two decades. His work is avidly followed on social media, particularly Twitter where his @ftlauderdalesun project is the world’s most followed iPhone-art account.

He is an evangelist for this new and exciting art form, iPhoneography, which is transforming the way we look at and share digital art. He is planning a second set of presentations on the subject at NOVA Southeastern University this fall and continues to present workshops and lectures in the city.

And given a glass of vino tinto he’s off shooting the shit about music. That’s where this blog comes in.