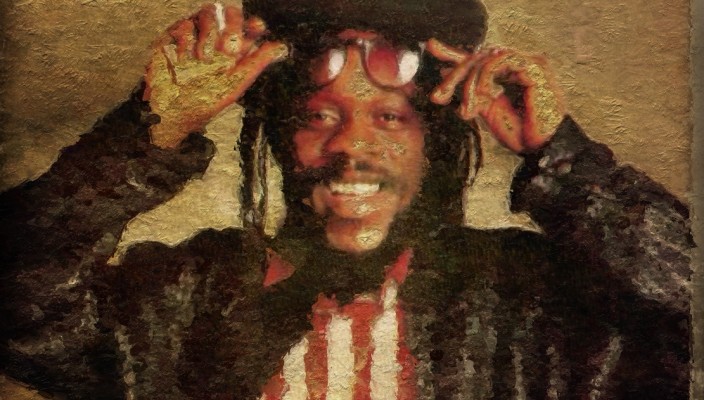 Around 79-80 all the biggest reggae sounds came on big thick disco 45s.

12″ sized vinyl on the first flight from Jamaica that tended to featured a hit song (not infrequently a re-cut of a rocksteady hit everyone in Jamaica knew well), mixed to a wicked toast by one of the top DJs of the day and then a big fat instrumental ‘version’ poured generously over the back of it. 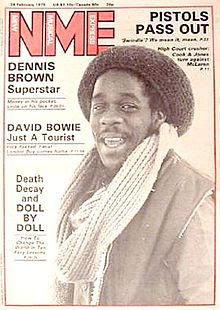 It seemed all of the best ones came with that familiar Joe Gibbs label. At that time if it was new, and had the Joe Gibbs stamp it was worth a listen without a shadow of a doubt. Even weak pop reggae would suddenly explode into passion and energy once the DJ took the mic and the Mighty Two –  Joel Gibson and his engineer E.T. (Errol Thompson) – set about the rhythm. 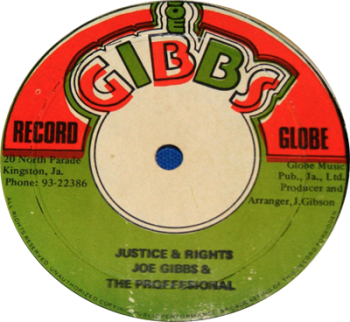 The glorious voice of Dennis Brown was frequently right at the center of things. Dennis of course was a superstar by then – even in the UK where he’d graced the cover of the biggest hipster paper of the day, the NME. He’d been a child star back in 60s Kingston and fell under the wing of Studio One’s Coxone Dodd and many of the artists who recorded there. He was a consummate showman and his breakthrough smash “Money In My Pocket” came when he was just a teenager.

I picked this cut as it shows how effortless the whole hit machine was for Dennis Brown and his partner on this disc, Big Youth, himself a big star in Jamaica. It’s a faithful cover version of the Heptones’ Studio One hit “Equal Rights”. Originally made in the late 1960s the song was one of the first reggae/rocksteady cross-over songs with a strong conscious lyric that appealed to the pop market as well as the emerging Rasta Fari movement. It is a song that means a lot to the rude boy generation and the rock steady survivors. A song that means as much as those better known American songs like ‘People Get Ready’, ‘A Change Is Gonna Come’ and ‘A Change Is Gonna Come’.

Dennis knew the Heptones, and their singer Leroy Sibbles really well. Sibbles was a key player at Studio One at the time an 11 year old Dennis was getting noticed by the Studio One team – Sibbles was producer, arranger and bass player on many Studio One hits. Heptones in turn would frequently provided backing vocals on Dennis Brown’s hits. Indeed Heptones rhythms provided the backbone of many reggae hits over the next decade.

In a way this re-make was an homage/payback to those days when young Dennis was known for his impressive covers of top hits and ballads. 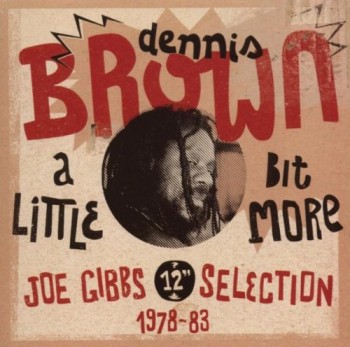 A fine collection of Joe Gibbs era cuts, all 12″ disco mixes featuring the likes of Big Youth, Kojak and Trinity.
Click the record to buy it!

By the time that this cut emerged Dennis Brown had worked with all the top producers and session men and had his own successful label in England. His arrangement with Gibbs apparently was cut-price use of the studio and in return Gibbs could use the rhythm tracks for other songs and versions. And boy did he make use of ’em! Getting guys like Gregory Isaacs and Dennis Brown to record the old Studio One classics that everyone knew gave The Mighty Two some classic rhythms to cut and recut.

Not every Dennis Brown record was essential listening, mind. Even though his velvet voice graces some of the best records of the roots and dancehall era he wasn’t really the most radical innovator. Like his contemporary Jimmy Cliff he was at heart a crooner and a crowd pleaser and so what if some of his cuts were verging on soft R&B.

The Mighty Two, however, were always gold. Gibbs’ house band were The Proffessionals – who included Sly Dunbar and Robbie Shakespeare – and their African Dub Chapters One to Three pounded the halls of every student flat in Hulme and Whalley Range. They were responsible for hundreds of number one hits back in Jamaica.

Over in England Dennis Brown’s music saw me through many a cold winter in rooms that I couldn’t afford to heat. Dennis on Joe Gibbs really is the sound of summer. Waves of tropical goodness pouring from the speakers.

I confess that Leroy Sibbles’ lyrics, inspired by civil rights struggles in the American south, to me were lost in the feelgood vibe of Dennis Brown’s amazing voice. As witnessed by his smash hit “Money In My Pocket” that we danced to regularly in the Manchester dive bars and student discos, he could do what Smokey Robinson did a decade before. Make a sad song sound like a celebration.