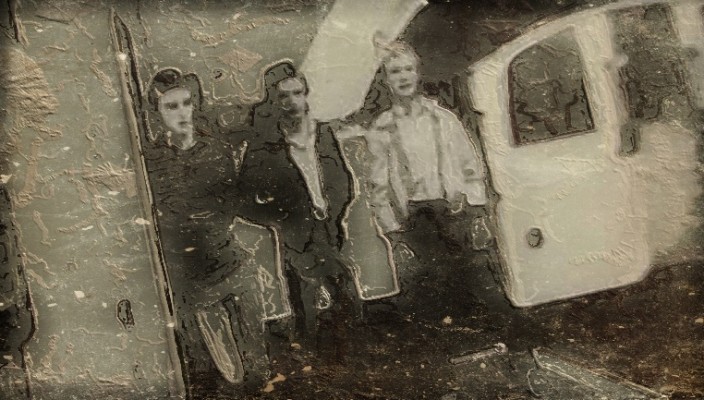 Down In The Tube Station at Midnight

The Jam’s classic single “Down In The Tube Station at Midnight”  evokes a very real fear – not completely eroded – of being trapped in a violent situation late at night in London’s Victorian underground network.

It reminds me very much of my first extended stay in London, staying in some dolehouse B&B in Bayswater and just riding out on the London Underground to watch some obscure rock band in some obscure pub in the distant suburbs of London. I did that nightly – a habit that returned when I moved to London to live in the early 80s. The girl I’d moved there with had left to move back up north, and I just couldn’t sleep…

I’d ride the underground – the tube – just for the fun of it half the time. I remember doing the whole of the circle line just to say I’d done it, and ended up stuck in a closed station more than once -hopping off the last train only to find the station had chained up already.

That’s the ambiance of Down In The Tube Station at Midnight. The rumble and echo of the tunnels, the heavy grease, diesel and hydraulic fluid odours that mixed with old fags and urine. all heady stuff. The more labyrinthine stations were particularly atmospheric, to the point of being downright spooky. The Elephant and Castle. Stockwell. Kings Cross.

I’d personally been spooked by the stories of the Moorgate Trail disaster earlier in the seventies. I was still a paper lad in those days and to see the same face on every paper I delivered on every red top tabloid was unnerving.

Occasionally I’d find myself on that same Moorgate platform and would wonder about the driver, Leslie Newson, who seemingly drove his train at high speed right into the end of a dead-end tunnel.

Down In The Tube Station tells a vivid story, and it brings back memories of being the last guy out of Camden Town, out of Old Street, out of Kings Cross. The irony of this recording is that rarely did the underground run as late as midnight, but, as this film clip shows, the atmosphere was very well caught.

« Move it Philip Selway – Coming Up For Air »