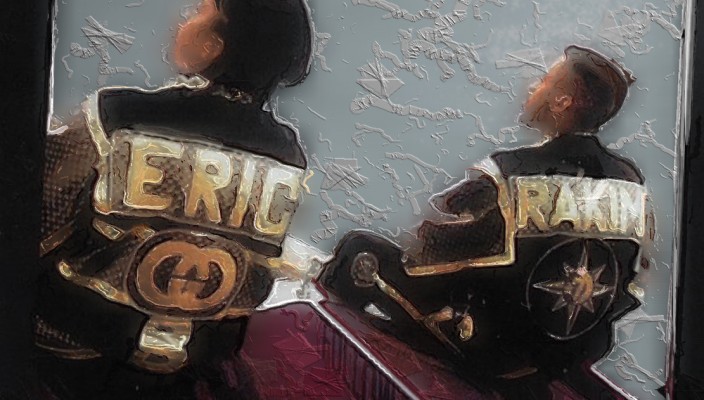 I can’t tell you what a blast it was to hear this on a club sound system for the first time.

Because the early hip hop and rap cuts shipped on quality 12″ vinyl, and I had some valve amp disco speakers as best friends, I knew full well what a woofer and a tweeter was.

Follow The Leader pushed it all way beyond. Boom!

It was a big surprise. Eric B and Rakim were Long Island 4th & Broadway label wannabes with all the bling. They had that ‘Coming To America’ style that the RnB crowd had, so in comparison to LL Cool J and the big Def Jam hipsters they were cool, but out-of-town. Their personal style left a lot to be desired and the videos just don’t come close to the music. Stylewise they never really moved on from VW badges hanging around their necks and giving ’em money meant more of the same fashion wise.

Follow The Leader just blew all image shit away. Who they were, where they were from, meant nothing when you heard that solid bass pounding, those eery Bob James string samples over the enormous bass, that subway third rail electric pulsing right through the speakers. The sound was everything. How it sounded down the walkman buds, down the subway, on the metro and deep in the undeground. It smelt strongly of deisel and electric and was as dark as engine oil.  From here on I invited ridicule by plugging ‘phones into the Walkman. I didn’t want to miss a beat of this stuff.

A bass line kicked in like a big spooky movie. Halloween taking Pelham 1-2-3 directed by Sam Raimi. Took control of your senses and filled you full of dread.

Until this came out samples were obvious and easy to spot.

Here, it didn’t fucking matter. Later on I heard that Microphone Fiend sampled those old Scottish funkateers Average White Band. This has Baby Huey and Bob James in there somewhere but floating around like Ghostbusters.

There was nothing avarage about Eric Barrier’s sample skills. He went for the best, by and large. He started with some of those old JB’s and Bootsy riffs – he knew his deep cuts and rare grooves.  Lyrics of Fury sampled James Brown’s  Funky Drummer like every hip hop record since. He would layer on the sonics and feed it through the new studio effects to the point where the music left the planet. He knew just where to crank it up. Damn kid was barely out of his teens. How did he know to do this.

And Rakim’s rhymes. Oh man, they hit so hard.

“In this journey you’re the journal, I’m the journalist
Am I eternal? Or an eternalist?
I’m about to flow long as I can possibly go
Keep you moving cause the crowd said so”

And then the Mike Tyson punch.

The price is right don’t make a deal too soon
How many notes, can you name this tune?
Follow the leader is a title/theme/task
Now you know, you don’t have to ask
Rap is rhythm and poetry, cuts create sound effects
You might catch up if you follow the records he wrecks
Until then keep eating and swallowing
You better take a deep breath and keep following the leader…