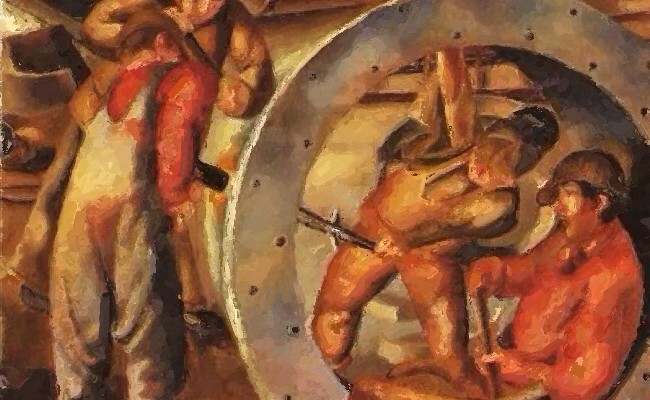 The song Shipbulding came at us quite literally out of left field.

Written by a singer still struggling to to shake off a superficial “angry brainic” persona – Elvis Costello – in response to a complicated political war.

I was still at college in those days and the idea of fighting for one’s country over a few islands off the coast of Argentina seemed ridiculous. The so called war was between a cocky British political class – Margaret Thatchers Conservatives – and an ailing South American despot dictator looking to rally his country around a populist war. The word ‘jingoistic’ applied on both sides, but when the sabre-rattling descended into deaths of British sailors and Argentinian conscripts it stopped being a joke.

Costello, and his co-writing partner Clive Langer between them wrote a complicated and heartfelt song in reponse that – for whatever reason – they didn’t feel worked with Costello as the singer.

Choosing Robert Wyatt to sing was an inspired choice. Wyatt was a radical figure both musically and politically, and he rose to the occasion with a simple, emotional and personal take that Neil Young in his prime would have been proud of.

But what also impressed was that Costello and Langer, both peripherally connected with the Stiff Records menagerie of artists and provocateurs had put together such a mature piece. Costello was finding success with his recordings and with Langer’s connections with Two Tone stars Madness he was also making waves in the pop charts. The latter’s bassist would provide the rolling stand-up bass lines that anchored this magnificent recording.

Shipbuilding was not a protest song – it was worldweary and lyrically dramatic. It spoke of the contradictions of a predominantly navel war that would revive the ailing British shipyard industry at the very time when kids from those same neighbourhood could be called up to fight and to die. It was personal AND political that spoke to all war situations, not just the Falklands War.

Having grown up in a dying industrial area, the thrill of a false promise of revival is a subject that still touches the heart. My own family lived through miners strikes and were subject to the same harsh economics that Thatcher’s Britain forced onto proud families who had build communities in the shadows of shipyards and foundries. Such a community would indeed welcome a sense of a positive future for their factories and ship yards, even if it meant building warships and missiles for a war no-one understood. Of course, inevitably market forces were allowed full reign in the end and damn the consequences. The ship yards closed.

A complex song in so many ways. And also beautifully mature musically, with rolling bass and subtle piano, and not cut to a set rhythm or click track. It flowed like an old Billie Holiday…

In my mind I mix it all up with Costello’s later solo version of the song that featured a trumpet solo by Jazz great Chet Baker. But Attractions’ keyboard star Steve Nieve provided a superb piano break that enhanced the piece so well.

It got my attention not least because it was one of the first post-punk recordings that sounded fully mature and confidently crafted.Lyrically the match of those old-school musicians who so derided punk and new wave music when it first burst out of our radios.

It was the sound of my generation coming of age lyrically and musically; A very special recording, magnificent to behold.

Here’s a few versions, starting with the original studio take.