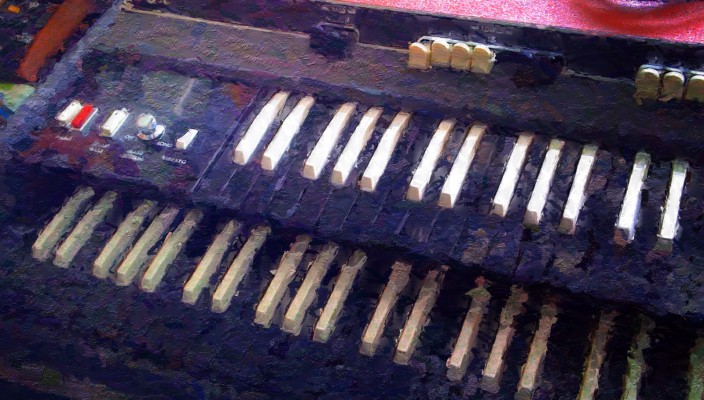 What do I know about… The Vox Continental

The Vox Continental is quite simply the king of keyboard cool.

It’s a transistor-based combo organ that came out in ’62 and immediately looked and sounded so rock’n’roll every hipster band had to have it. That reverse harpsichord-style black-and-red keyboard and the chrome Z stand gave it such a 60s vibe, and it had such a wonderful sound….

Hard to figure who used it to create a hit first.

I’d have placed good money on Joe Meeks ubercool Tornadoes (remember Telstar?) but they used the earlier version of it.

I reckon it was The Animals ‘House of the Rising Sun’ that took it out to the world as part of the British invasion.

The Conti was right at the heart of the blues wave thanks to Georgie Fame’s use of it on Animals releases and his own solo stuff. , Stateside it was quickly picked up by rebel blues and garage acts – before becoming the sigature sound of great keyboard players like the Animals’ Alan Price, The Doors’ Ray Manzarek and the Heartbreakers’ Benmont Tench.

The Americans just went for it. It was THE cool keyboard to be seen with. Within seconds you had ?tion Mark and the Mysterians, The Doors, The Monkees, The Seeds,The Four Seasons, and The Velvet Underground giving it the full Conti.

Don’t worry, there’s a handy videola right below so you can catch up.

There were lots of folks in the 60s who looked like they were playing the Vox Combo, yet they were using another popular combo keyboard, the Farfisa. More on that another time. Truth is that the conti just looked SO much better in the videos.

The Vox combo had a fine history in rock music and even though the venerable keyyboard was phased out in the 70s they are much prized by modern rockers. The most recent use of the Conti was been Sheffield’s own Arctic Monkeys on the way to breaking the US.

I could go on – an will go on – about all these bands and what they’ve done for music. But relax, pop a cold one and witness the Vox Conti in full effect…

Now all I’ve got to vigure out is why Jack White never recorded with it. Looks wise it is SO White Stripes.

You still with me? Brace yourselves…

« This is England Shipbuilding »