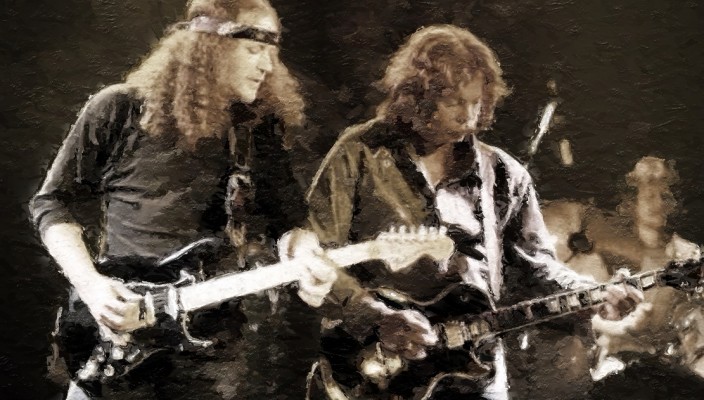 What do I know about… Southern Rock

My the first encounter with Southern Rock fans was Knebworth in ’76. REO Speedwagon fans throwing bottles of piss at Tom Petty and the Heartbreakers. Now I know that these beery REO fans just looked like the scruffy bedenimed lazy-arses who listened to Freebird on their 8-tracks.

I now know that REO Speedwagon just sounded southern fried. But if your fans are going to bottle off the Heartbreakers playing their first ever UK gig then you deserve every disease in the festival bogs, lads.

These were days when every denim jacket had some American band embroidered/patched/sharpied onto the back, so it was clear where alleigances lie. By and large these guys were pretty hostile to any rock fan that didn’t look like them, and that meant those skinny jeanned and rickenbackered posers up on that stage. Whe-hey.

I’d gone punk by then and being the only guy with punk hair at a Hawkwind gig isn’t the most comfortable way to blend in. After those happy days avoiding post-hippy stoners forgive me for generalizing.

Southern Rock seemed then and now like some hinterland inhabited by scruffy long haired roadie types. The confederate flag on the back of your wranglers just compounded the them-and-us mentality. “I hope Neil Young will remember…” Chaps I think he’d forgotten by the end of the week.

The Allman Brothers Band seemed almost speedfreak compared to the laid back rock stylings of Leh-nerd Skin-nerd. In England fans of this sort of thing tended towards the smelly fake-biker end of things. Bells Whisky rather than Jack Daniels. John Player Specials rather than Marlboros and a growling Norton Commando rather than a Harley Davidson.

It took me many years to look Southern Rock in the eye and forgive that musty denim smell lingering in the festival air. Black Crowes and R.E.M. helped by incorporating southern themes, and Stevie Ray Vaughan sounded nice on the hipper jukeboxes.

Then I discovered Drive By Truckers, James McMurtry, Lucinda Williams and My Morning Jacket mixing up the blues and rock in fascinating ways – a long way from the dixie flag and the Easy Rider attitude.